Milano, Worlds championships, March 2018. On the ice they are powerful, elegant, confident and their programs are always deeply touching. Off ice they are both original characters, fun, clever, and they have a lot to say. We had a talk right after the short dance. Starting with Andrew, while Kaitlyn is running some errands.

Andrew Poje, with a big smile : I do love cooking !

Andrew : I really enjoy exploring very different types of cuisine, that's one of my favorite things. Especially going from competition to competition, I like going into every city and really experiencing their local cuisine, but also experimenting at home. I try new foods, I try obscure things ! I try to understand why food is so special to some people.

Andrew : (laughs) No, no casualty so far and my friends apparently like my food !

Andrew : It's another of my things yes. We don't have a lot of down time but when we do... I guess it's my inquisitive nature. I like to explore, I go to flea markets, things like that,  and I try to find a new life for some things. One person's trash is another man's treasure.

S.I.G. : Actually it sounds like the opposite of recycling.

Andrew : Exactly ! I have a lot of junk and pieces at my house that I kind of repurpose. Upcycling is upgrading something that was destined to trash and making it a better thing.

Andrew : Most of the time it ends up being a collobaration between the coaches, us and sometimes even friends. But we also like to involve fans. We like to ask them and just see what they come up with. It is easy for us to explore iTunes and Spotify but it's hard expending to different grounds because skating has a very tight mind.  We know what works. But we try to find different kinds of musics and fans are a great help. We just go out there and see what they say, what happens.

(Kaitlyn is now joining us).

S.I.G. : My first questions to Andrew were about his personal hobbies so now it's your turn. I hear you love to write. What do you write ?

Kaitlyn : Well, honestly whatever I feel like, it's a very mixed media. I have this sketch book that I carry everywhere and whenever I feel an emotion that's too much to hold inside, I write it down and try to let it out . It can have any form, it's notes, thoughts.

S.I.G. : And you study foreign languages ? How many do you speak ?

Kaitlyn : Honestly, I don't speak any fluently but Russian and Spanish are the ones I know the most about. But Andrew and I make it our goal to learn at least a few words in every country that we visit, so we know a bit of Swedish,  Chinese, Japanese, Finnish, Czech, German, French. I know quite a bit of French. I love to be able to communicate.

Andrew : Sometimes it can get confusing because you forgot which one is what !

S.I.G. : About programs... A skater told me once that building a program and performing it is like raising a baby for only one season than abandoning him to adopt another one. What's your take on this ?

Kaitlyn : Yes ! I think it's a very interesting way to put it. It's saying  goodbye to a good friend at the end of the season. It can sometimes be a love/hate relationship as it is a very emotional thing to build a successful program in my opinion. It takes a lot of hard work, a lot of dedication. This year we were lucky to bring an old friend back ! It was so familiar and so nice !

S.I.G. : At the press conference, you said your free dance was basically showing your soul out there.

Both : Oh yes, this one comes from the heart but also from our soul.

Andrew : You know, we don't want to try or force anything special. This program has given so much to us already. It's more like a celebration of what it's giving us. It's giving us maturity, connection, a deeper meaning of what emotion is between a man and a woman. We can really feel it on the ice. It's been a pleasure to have it. We don't know if it's going to be the last time but... who knows ? (He hesitates) We'll see. For now we want to enjoy it.

S.I.G. : Twice, you were 7th at the Olympic Games. Are you planning to go to Beijing ?

(Laughs) Kaitlyn : I don't know. I don't think so. It's a very strange thing you know,  to place the same four years later. If you do it for the result, and you get the same result, what's the point ? But you live so much in four years and it makes you think like, at the end of the day, it's so different !

Andrew : Yes, we experienced so much in these four years...

Kaitlyn (adamant) : And we know we're different ! We know it ! We're not defined by our ranking but it's an interesting way to look at our sport. We're different people and we got the same place.

S.I.G. : Oh it's hardly a failure, I mentionned it just to know if you have plans for the future !

Kaitlyn (making a negative sign with her hand) : We don't have plans at all !

Andrew : This season has been long and very draining on energy. So we are very excited to skate this last program then to take some down time and figure out what we want.

S.I.G. : Well, thank you for your time and good luck for the free dance ! We'll see you on tour during the spring !

Andrew : Sure ! Down time will be after the tour (laughs).

They ended up going back home with a bronze medal. A long deserved bronze medal. Should this be the last of their competitive career, it was definitely a beautiful way to end it. 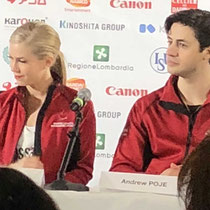 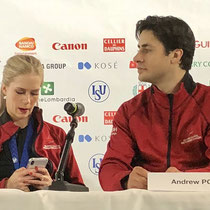 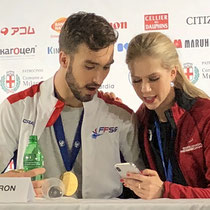